In Country Military Support for Kennedy’s 1963 Costa Rica Trip. President John F. Kennedy visited Costa Rica in 1963 to attend the Conference of Presidents of the Central American Republic. In doing so, Kennedy became the first sitting U.S. President to make an appearance in Costa Rica. 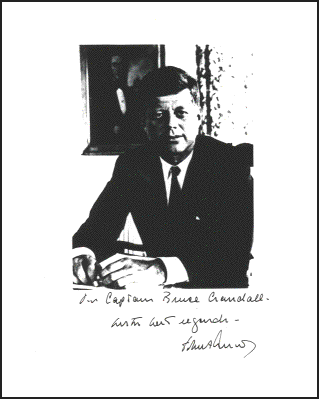 “We were the children of the 1950s and John F. Kennedy’s young stalwarts of the early 1960s.  He told the world that Americans would ‘pay any price, bear any burden, meet any hardship’ in the defense of freedom. We were the down payment on that costly contract, but the man who signed it was not there when we fulfilled his promise. John F. Kennedy waited for us on a hill in Arlington National Cemetery, and in time we came by the thousands to fill those slopes with our white marble markers and to ask on the murmur of the wind if that was truly the future he had envisioned for us.”

We Were Soldiers Once…And Young

War is an ugly thing but not the ugliest of things.   The decayed and degraded state of moral and patriotic feeling which thinks that nothing is worth war is much worse.  A man who has nothing for which he is willing to fight, nothing he cares about more than his own personal safety, is a miserable creature with no chance of being free unless made and kept so by the exertions of better men than himself. 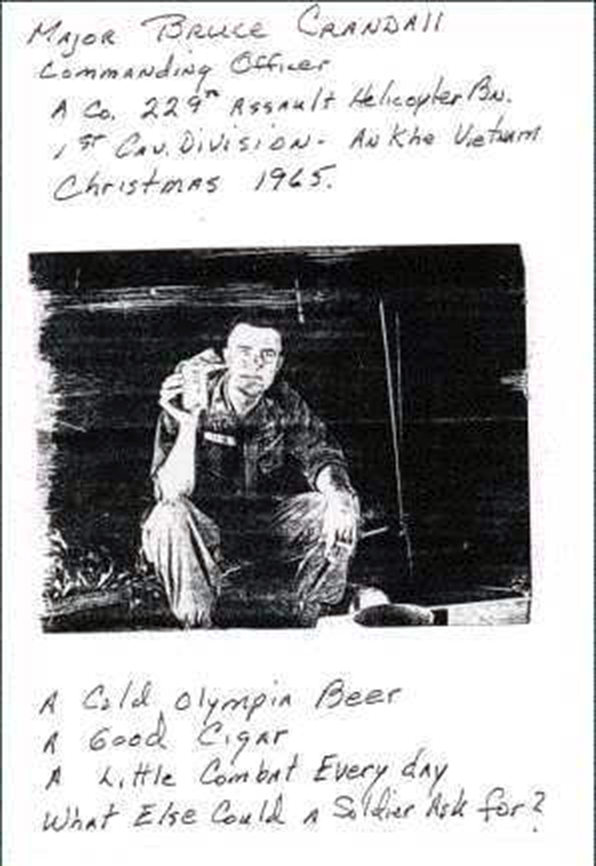 This letter is from Major Bruce P. Crandall in Viet Nam to his family who live on Scenic Hill. In November, Major Crandall was awarded the Distinguished Flying Cross for his bravery during a non-scheduled medical evacuation. 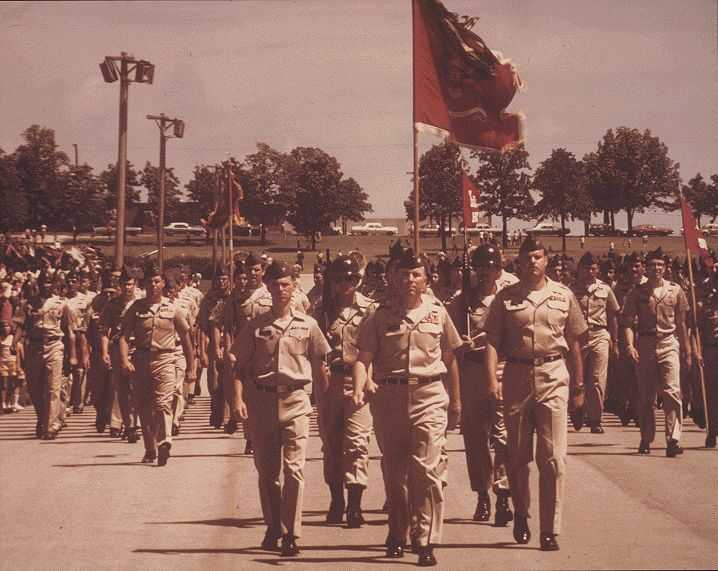 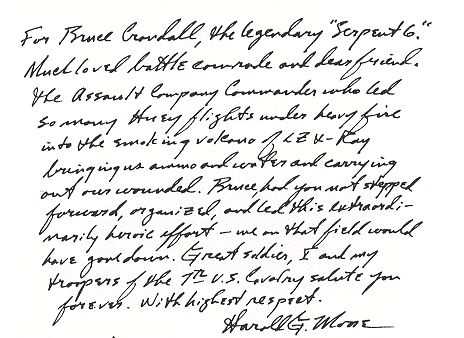 We left for Southeast Asia in 1965
Our unit of twenty helicopters and two hundred some guys.

We arrived in An Khe in late August that year
We had the finest troops and the best combat gear.

We soon proved what our Huey choppers could do
With big victories at Ple Me, Dac To and near Pleiku.

That was twenty years ago – how time has flown by
Twenty long years since our helicopters filled the Vietnam sky.

Yesterday, the wife and I came to Washington, D.C.
To look at our little part of history.

We walked along the memorial to our Vietnam comrades
And we shared the sorrow of thousands of Moms and Dads.

Yesterday I looked on the black wall and saw the names of my missing crew
They are listed as dead and in my heart I know that it’s true.

The black wall ends the little lingering hope held deep inside
That somehow, some way, they might still be alive.

The war has been over for years they say
But I think, for me, it ended yesterday. 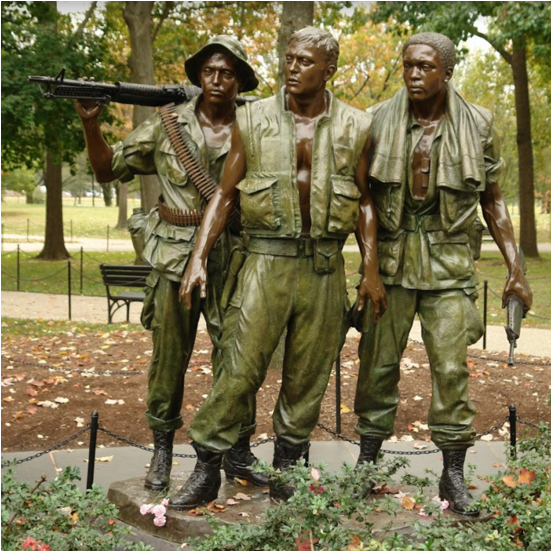 We will always remember the brave men and women who made the ultimate sacrifice for us and our country!

COL Crandall’s call sign was Ancient Serpent Six.  He had a custom graphic on the doors of his Huey.  He was lovingly referred to as Old Snake (or Snake for short) by his men.  The Battle of Ia Drang, which lasted from Nov. 14 -18, 1965, was the first major battle between the U.S. Army and the North Vietnamese Army. It took place in the Central Highlands of South Vietnam. The battle saw the first use of a large scale helicopter air assault and Boeing B-52 Stratofortress strategic bombers being used in a tactical support role. 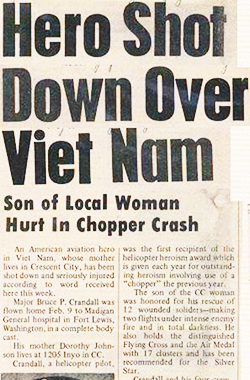 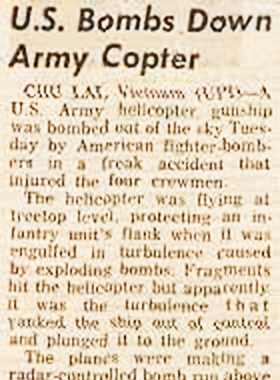 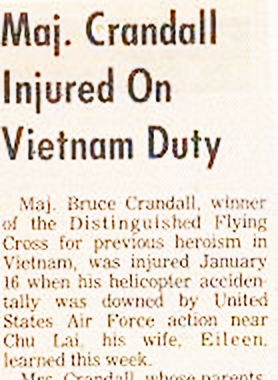 It is a privilege to introduce Bruce Crandall but first who was, who is this man? Born Washington State; now City Engineer in Mesa, AZ. Served 24 years in the Army. Married 3 Children. All that is irrelevant to this gathering. What is relevant is that he flew 1st Cav. troopers into, and wounded out of, most of our battles in Vietnam in ’65 and ’66 as “Serpent 6” commanding A Co. 229th Assault Helicopter Bn. I found out then that Bruce is very candid, aggressive, and could care less about what others think of him personally. He knew that he and his outfit were good. Whether he was talking to a General or a private, he never held back.

He had his own high standards, and he expected his officers and men – and those he worked with like me to measure up. We all knew where we stood and where he stood. He was an ace pilot and personally fearless. “Serpent 6” (also called “Old Snake” behind his back) has a great sense of humor. It comes out at the right times and often softens his comments and eases tense situations. He was a charismatic leader and professional commander of a skilled, high tech group of officers, men and flying machines. His pilots and his crews proudly reflected their leader.

In the Ia Drang “Old Snake” and his troopers flew in and out numerous times carrying troops, ammo, water, and the wounded and the dead. Some of his own officers and men were wounded in the process. With full recognition of, and admiration for, the courage of the Infantry grunts dead and alive, who stood tall and held the line in the Ia Drang we are very grateful to Serpent 6 arid his air crews.

In Masher-White Wing on the night of 31 January 1966, Bruce’s actions resulted in his selection by the Aviation/Space Writer’s Association out of 56 helicopter pilot nominees from all over the world to receive the AVCO/AWA Helicopter Heroism Award for 1966.

On his second tour, flying with the 1/9 Cav. in Jan. 1968, he and his Huey were on a gun run south of Bong Son when they were blown out of the sky by a B-52 Arc Light strike on the wrong target. He wrote me later that the bird and crew hit the ground at 90 knots thereby giving him and his crew the opportunity to evaluate many military medical facilities during the following few months.

Men of the Cav., ladies and guests, here is “Serpent 6” himself.

Invited to Join the Gathering of Eagles 1996

Eagles–high-flying pioneers with vision and courage who, individually and collectively, helped form the history and the heritage of aviation. The invited guests are the stuff of which legends are made. Their experiences and achievements as aviators encompass the breadth of all the feats of manned flight. Their accomplishments range from piloting a balloon across the Atlantic to orbiting the Earth; from testing innovative military aircraft to developing commercial aircraft; from flying as allies to fighting as adversaries. Among those who have attended are Buzz Aldrin, Neil Armstrong, Pappy Boyington, Benjamin O. Davis Jr., Jimmy Doolittle, Joe Engle, Francis Gabreski, Jeana L. Yeager, John Glenn Jr., Robin Olds, Robbie Risner, Alan Shepard, and Chuck Yeager–just to name a few. 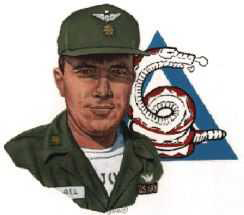 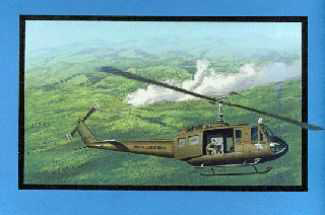 Then Major Bruce P. Crandall was assigned as Commanding Officer of “A” Company, 229th Assault Helicopter Battalion, 1st Cavalry Division (Airmobile) in the Republic of Vietnam in 1965-66. In this position, he had command of 20 UH- I (Huey) helicopters and flew the lead helicopter on over 750 combat missions, leading as many as 60 lift helicopters plus their gunship and aerial rocket artillery support helicopters on air assaults in the central highlands of RVN. In addition to these flights, he volunteered and flew a number of medical evacuation rescue flights which he undertook after the Medical Evacuation Unit responsible for these missions refused to fly due to the, intense enemy fire in the pick-up zones.

Two of these volunteer missions, 14 November 1965 and 31 January 1966 received special recognition. The November 1965 missions into LZ X-Ray in the IaDrang Valley was recognized in a number of books written on the battle including “We Were Soldiers Once and Young” written by Lt General Harold G. Moore, Commanding Officer of the Infantry units in X-Ray; and, Joseph Galloway, a combat reporter who was in the LZ during the battle. (There is currently a movie in production based upon this book.) Crandall led the helicopter operations during this fierce battle which was the first meeting between a major force of North Vietnamese Regulars and a battalion-sized U.S. military unit.

The January 1966 rescue was recognized by the Aviation and Space Writers Association for their first “Helicopter Heroism Award”. This rescue was selected from an international field of nominees, both military and civilian, as the outstanding act of heroism involving a helicopter. At the twentieth anniversary of this award, the organization ranked Crandall’s rescue as the most outstanding in the 20 years of the award. Crandall was also inducted into the elite “Gathering of Eagles” by the United States Air Force in 1996. He is one of only seven Army aviators so honored. The Gathering of Eagles is the only international organization dedicated to recognizing outstanding achievements relating to both civilian and military aviation throughout the world. 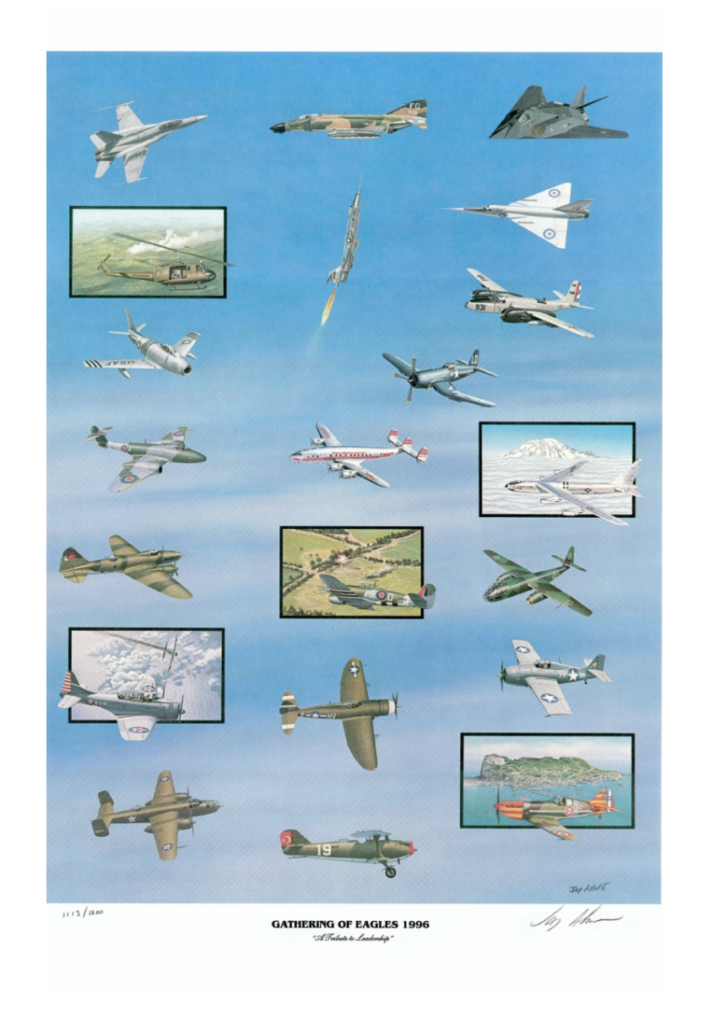